"The Seventh Day of Passover"


The seventh day of Pesach marks the day when many miracles were performed for our forefathers at the Red Sea. ...It was on this very date, eighty-one years before Israel stood on the banks of the Red Sea, that Moshe was cast into the river as a result of Pharaoh's edict. ...On this same date, one year before the Exodus, Moshe left Midyan at God's command to take Israel out, for on the fifteenth of Nisan, God had appeared to him from within the bush and urged him for seven days - the period of Pesach - to accept this mission.  (The Book of Our Heritage)

"And God brought a strong east wind to blow over the sea all that night."  (Shemot 14:21) - If God wanted the sea to split, He could have ordered it to do so; with one declaration. He could have transformed it into dry land. Why did He bring "a strong east wind" (...from the desert)? God sought to imbue Israel with the belief that all of the acts of Creation are dependent upon His word. The wilderness and the inhabited places, the sea and the wind, the clouds and the fire - all are the work of His hands and subject to His direction. There is no aspect of nature independent of His control. (The Book of Our Heritage) 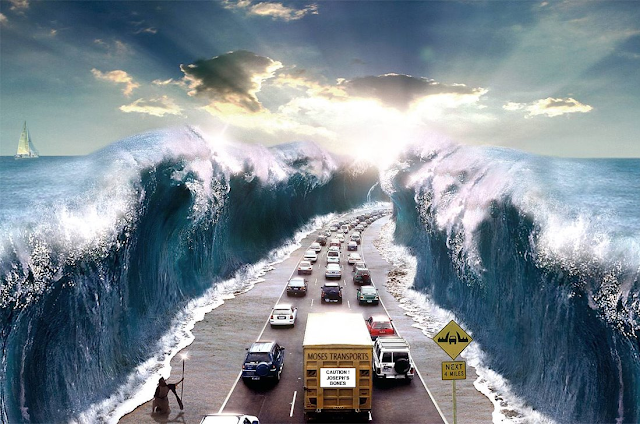 Posted by Devorah Chayah at 6:44 PM