By now, everyone knows there is an active supervolcano in Yellowstone Park in Wyoming, but did you know there is another one in California?? And it is currently at level "yellow" alert status because of an earthquake swarm???

Earthquakes are the normal in California, however within the last week an upswing in activity has been noted. The Long Valley Caldera is showing signs that magma is indeed moving down there.

The caldera is just north of Ridgecrest off of Highway 395 and activity has been spiking within the last week.

"We don't think much is going on there, but it is being monitored," said the USGS. "We have teams in the area and have just recently finished a study on the area."

So while no one can predict what will happen, just as Yellowstone, the Long Valley Caldera is considered a super volcano that can go off at anytime.

"We've notice an increase in 2s and 3s across California as well, with poppers across Southern California," said TheWeatherSpace.com Senior Meteorologist Kevin Martin. "This usually means we are going to have the stress released soon in the area. What is also interesting is Long Valley and Mammoth Mountain activity is happening at the same time. This is real interesting."

According to Jim Berkland, a retired geologist, Full Moons usually generate large earthquakes due to the tidal forces. There is a lunar eclipse tonight so the moon can't get any fuller. 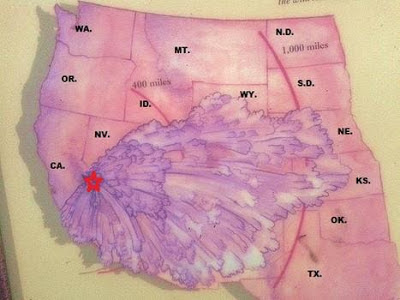 Posted by Devorah Chayah at 3:25 PM