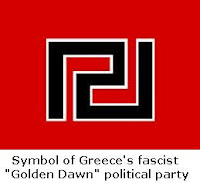 And how long until it reaches the rest of Europe and even America, too?

...Entering its fourth year in recession, Greece now outstrips even Spain for youth unemployment with the new statistics published yesterday showing joblessness among the under-25s at 51.2 per cent. The headline unemployment rate is 21.7 per cent while the real rate is believed to be closer to 25 per cent.

It's in this environment that a fringe group of neo-Nazis that would previously have struggled to attract a hundred supporters to one of its rallies seems set to enter parliament according to polls.

Together with two other ultra-nationalist parties, LAOS and Independent Greeks, some surveys indicate that the far right could take as much as one-fifth of the vote on Sunday.

...One of the new lawmakers is likely to be Elias Panayiotaros. A candidate for central Athens, he runs a shop called Phalanx selling military gear. His business card features a Byzantine eagle and a skull and crossbones. Speaking at the party's offices opposite the Larrisis train station where volunteers do weekly handouts of clothes and food to "needy Greeks", Mr Panayiotaros said that the priority in the midst of the economic crisis was to throw out foreigners. "All of the immigrants are illegal, even the ones that have been in the country for a long time and they have to be punished," he said.

Greeks were afraid to leave their homes as immigrants were on a spree of robberies, rapes and murder, he said. The cost of jailing or deporting more than a million people would be offset, he said, by putting them into work camps. Those that were not prepared to work would not be given food, he added.

Another priority would be the immediate closure of all foreign non-governmental organisations, which would be compelled to return all funds to the Greek state. A new organisation would be established, he said, to be called "doctors with borders" which would provide medical services exclusively to Greeks.

Once Greece was withdrawn from the EU's passport-free Schengen zone and the borders were sealed, all foreigners would require a visa to visit Greece, including the millions of tourists who come each year.

"We're not afraid to be called Nazis or fascists – the whole political system is against us," said Mr Panayiotaros. Appeals by mainstream parties for Golden Dawn to be prevented from entering parliament were met with veiled threats against MPs.

Asked about the party leader Nikos Michaloliakos' links to the military junta which ruled Greece between 1967-1974, he said that people were calling for the return of George Papadopoulos, the leader of the Colonel's regime.

"The name of Papadopoulos is being heard everywhere," he said.

Ahead of its most uncertain election, the Golden Dawn's message is getting through to some first-time voters such as Ioanna Vassila, who is unemployed. Attending a political rally for the first time in her life, the 29-year-old said she was excited to be voting for a patriotic party and that it was time to for Greece to be "cleansed of the foreigners". Laughing and joking with her boyfriend they applauded as men in paramilitary uniforms waved black flags and chanted "Greece for the Greeks".
Posted by Devorah Chayah at 10:42 PM