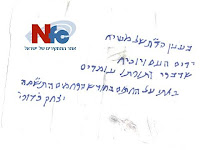 25 Iyyar 5772
Day 40 of the Omer
Because of a letter purportedly written by Rabbi Kadouri before his passing, in which the xians believe he named Yeshu - G-d forbid! - as the Mashiach, they have latched onto the saintly rav's good name and are now making all kinds of other lying claims, including that he converted to xianity at the end of his long Torah-filled life - Hashem have mercy!! Be aware that many messianics and other xians are using the rav as a means to their nefarious ends. His saintly, blessed name is now appearing on many of their websites and in many of their videos.

HaRav Yitzchak Kadouri's name and memory should only be for a blessing!!!
Posted by Devash at 3:34 PM

This news is many years old. But a reminder warning doesn't hurt.

Do you know if they are deliberately misrepresenting something Rav Kaduri actually wrote, or is it a forgery?

Do you know if they are deliberately misrepresenting something Rav Kaduri actually wrote, or did they just make up the whole thing?

Like Rashi tells us in this week's portion of Shelach (Num. 13:27), a good lie needs a bit of truth to make it it stick. No better source for holiness and truth than the great Rav ע''ה.