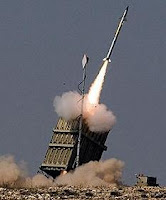 This is a picture of the iron dome anti-missile battery in operation. (In Hebrew it's "iron kipa.") I think that in a couple of weeks we will look back and realize that it all started as Purim ended in Eretz Yisrael.

...The Iran-backed Jihad has in its arsenal Fajr 5 missiles whose range is 110 kilometers and Fajr 3 which has a 60-kilometer reach. They bring into range Israel’s urban, commercial and population hub cities between Tel Aviv and Rehovoth, which are outside the range of the Grads and Qassams, more 110 of which were fired from Gaza since Friday.

Military sources told debkafile that the Jihad terrorists are aiming for a spectacular, multi-fatality strike in a major Israeli city before ending this round of violence on order to strut as victors in Palestinian and Middle East public eyes. This ambition has been frustrated for three days by the Israeli invention, the Iron Dome interceptor of short-range missiles, which has saved important towns like Beersheba and the ports of Ashdod and Ashkelon from casualties and serious damage by intercepting the Grads before they land.

Islami Jihad tacticians are thought to be wracking their brains for some gadget capable of disarming the Iron Dome batteries.

...Debkafile’s military sources foresee a Palestinian war of attrition stretching out into the next couple of months. Unless halted by a ceasefire, it could escalate sharply if Jihad introduces Fajr missiles to its operations and./or if Israel decides to send its army into the Gaza Strip and finally root out the missile threat Palestinian extremists have been wielding against Israeli civilians for a decade.

Stay tuned to the continuing saga of "Israel's Wars."
Posted by Devorah Chayah at 11:49 AM