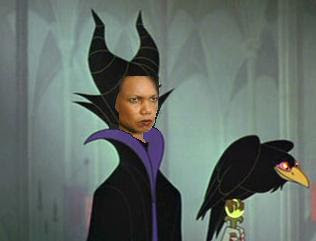 
(IsraelNN.com) U.S. Secretary of State Condoleezza Rice had some tough words for Israel Sunday regarding the "gestures" Israel has undertaken to carry out in Judea and Samaria.

"We will monitor exactly what the Israelis do and the purpose is to improve the Palestinians' freedom of movement," Rice said. "We want to be much more systematic about what is promised and what is actually carried out," she added.

General William Fraser, Rice said, will be following Israel's implementation of the Road Map closely "and making sure that the road blocks are indeed removed and that this has an impact on the Palestinians' freedom of movement." Before Fraser arrived, she said, "we did not do this and we received promises that the Israeli steps would be carried out within a short time. I expect this to happen very soon."
But she has conveniently forgotten that she is speaking to the servant of Hashem. She has no right to issues orders to us and she and the nation she represents will pay a price for their chutspah...