Conflagration - The Spark That Ignites the Fire?

Either one of these could do it, but taken together, it could be more like dynamite.

Ahead of Friday funeral of Al Jazeera journalist,...
Abu Akleh, 51, was shot dead early Wednesday morning amid clashes between Israeli troops and Palestinian gunmen during an IDF raid in Jenin. Palestinian Authority President Mahmoud Abbas has accused Israel of “executing” Abu Akleh.
...bu Akleh was born in East Jerusalem to a Palestinian Christian family and her funeral is slated to pass through Jaffa Gate and the Christian Quarter of Jerusalem’s Old City.
Hundreds of thousands of people are expected to take part in the funeral for Abu Akleh, who was a well-known face in the Arab world for her decades of reporting for Al Jazeera.
The procession is expected to depart around 2 p.m. from her family’s home in the Beit Hanina neighborhood of Jerusalem and eventually culminate at the Christian Mount Zion Cemetery.
A police official told the Kan public broadcaster that every effort is being made to ensure the funeral proceeds without interruptions.
“The whole world is looking at us and at this event,” the official was quoted as saying. “The goal is to prevent as much as possible any friction.”
Concern has also been voiced about potential clashes atop the Temple Mount, the flashpoint holy site that has been the location of repeated unrest over the past month.
According to the Quds News Network, Hamas has called on its followers to barricade themselves inside the Al-Aqsa Mosque atop the mount and prevent any Israeli forces from entering.
Israel Police Prepare for Arab March in Lod Marking Anniversary of Anti-Jewish Pogroms
Israel Police are beefing up their forces to contend with an Arab march slated for Friday (May 13) in Lod.
The march is intended to mark the one-year anniversary of Arab pogroms against Jews that wracked that city and others with mixed populations during Operation Guardian of the Walls, the 11-day mini-war launched by Hamas against Israel.
...“On Friday, the Arabs of Lod will mark the anniversary of the “Events of Honor,” the Arab nickname for the 1947 riots,” wrote Yedidya Zuckerman in a tweet. “I find it delusional that the State of Israel allows rioters to celebrate a year of riots. It is delusional that the State of Israel, which knew how to stop buses for demonstrations against Oslo and the (2005) Disengagement (from Gaza), allows buses from Nazareth, Umm al-Fahm and from all over the country to reach Lod,” he wrote.
“In recent days, posters have been published on social media and in the Arab press, promoting the ‘V’aad Ha’Am in Lod’ (People’s Council of Lod) calling on the public to attend the event to mark the ‘anniversary of the Events of Honor,’ which are disturbances perpetrated by Arabs against Jews in the cities involved during Operation Wall Guard.”

For the believing Jew, there is no fear, however, as he/she knows who is ultimately in control.  Ayn od milevado!!

Hashem spoke to Moses on Mount Sinai, saying: "Speak to the Children of Israel and say to them:  When you come into the land that I give you, the land shall observe a Sabbath rest for Hashem."  (Vayikra 25:1)

The commandment of the Sabbatical Year has a special relationship to Mount Sinai.  At Mount Sinai, God's majesty and power were so manifest that it was clear that the determining factors in human material success are God's will and man's worthiness.  The land's rest in the seventh year, too, teaches that the primary force in the universe is God, not the law of nature.  (Stone Edition Chumash Commentary) 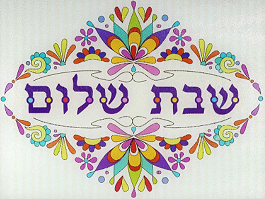 Posted by Devorah Chayah at 6:39 AM