The Trap Has Been Sprung by HKB"H

The same week that American Jewry went overboard castigating Israel for the inclusion of the political party Otzma Yehudit because of its connections to Rabbi Meir Kahane, ztz"l, Hy"d, a distinguished and holy Cohen, the world saw them represented by another Cohen.


ALL THE JEWISH MOMENTS FROM MICHAEL COHEN’S DRAMATIC HOUSE TESTIMONY

...[Rep. Mark Meadows, R-N.C.] demanded to know how Cohen could call Trump a racist when Cohen himself brought Lynne Patton, an African-American woman, into the Trump organization (Patton is now a political appointee at the Department of Housing and Urban Development).

“You made some demeaning comments about the president that Ms. Patton doesn’t agree with!” Meadows said. “In fact, it has to do with your claim of racism. She says that as a daughter of a man born in Birmingham, Alabama, that there was no way she should work for an individual who is racist — how do you reconcile the two of those …”

Cohen interrupted: “As neither should I as the son of a Holocaust survivor.”

...Answering Rep. Debbie Wasserman Schultz, D-Fla., whose political rise was short-circuited in part because of the email thefts, Cohen also implicated Trump’s Jewish daughter, Ivanka, saying she and her brother, Donald Jr., also were pursuing the Moscow deal well into the campaign.

In his prepared testimony, Cohen cited his father’s Holocaust survival as a reason for coming clean after a decade of loyalty to Trump, and also called the president a racist. Asked why he decided to cooperate, beyond the obvious reasons — the FBI raided his properties and found incriminating evidence being the major one — Cohen cited “Charlottesville.”

...There were other subtle reminders of Cohen’s Jewishness, like when he was asked by a friendly Democrat about Trump’s recent insinuation that Cohen’s father-in-law was a criminal.

“He came to this country in 1973, [with] the expulsion of Jews from the Ukraine,” Cohen said of his father-in-law. “Never in my life did I think Mr. Trump would do something so disgraceful.”

And some on Twitter wanted to know what Rep. Chip Roy, R-Texas, meant when contrasted Cohen’s past support for Trump, which Roy said was self-serving, with those of “real Americans” who backed Trump because they wanted change.

...Trump, attending the summit with North Korea’s Kim Jong Un in Vietnam, did not comment on Cohen’s testimony except to retweet his own tweet from the evening before: “Michael Cohen was one of many lawyers who represented me (unfortunately). He had other clients also. He was just disbarred by the State Supreme Court for lying and fraud. He did bad things unrelated to Trump. He is lying in order to reduce his prison time. Using Crooked’s lawyer!”

The last reference was apparently to attorney Lanny Davis, who represented President Bill Clinton during his multiple scandals in the 1990s and is close to Hillary Clinton. Davis, a Jewish communications professional who once served as a spokesman for The Israel Project, sat directly behind Cohen during the hearing.

Some Highlights From the Testimony 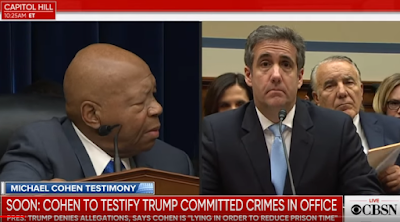 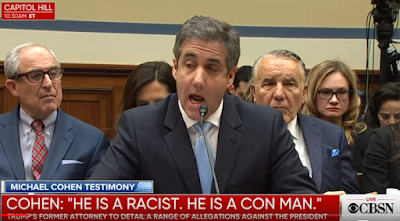 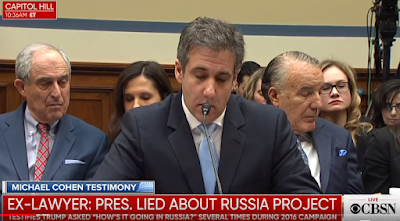 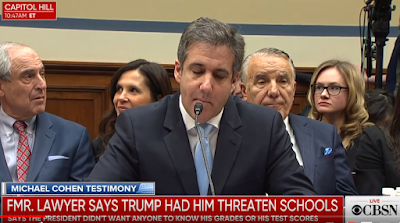 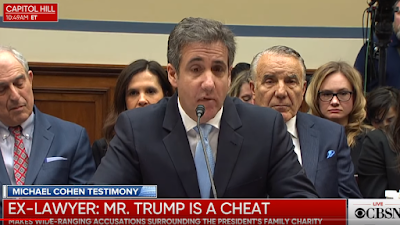 Just imagine what this is going to do to all of Mr. Trump's white nationalist supporters and then just imagine who they are going to take their anger out on, especially if this ends with an impeachment of the president.


Thirty years after his assassination, most American Jews still bear baseless hatred for Rabbi Meir Kahane and trip all over themselves to be the first one to denounce him and anyone who shows him any respect. But, for this Cohen, who has given up all rights to the name, and his despicable acts... If any Jewish leader or organization has denounced him, I am unaware of it. The silence is deafening.
Posted by Devash at 11:48 AM