Getting Serious in Syria 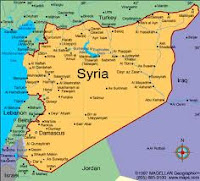 Well, I wanted to concentrate more on getting ready for Hanukah, but the news about Syria is spreading. How ironic is it that it's the Syrian Greeks we were fighting 2176 years ago?

I realize that there have been reports of imminent threat to Israel from Syria for months now, but today, it seems to have more substance than ever, so I'm passing along the following:

Rebels Appear to be Closing in on Syria's Assad

Syrian opposition forces captured a military air field, as well as the army's 22nd Brigade air defense base, both just outside Damascus.

The capture, accomplished by the Free Syrian Army, was described by the pan-Arab Al-Arabiya news network as “an important military achievement.”

Rebel forces have also cut off a sprawling military base outside of Aleppo.

...As the clashes in the capital have further chipped away at the few loyalists who remain in Assad's administration, concerns are also growing over Syria's chemical weapons arsenal.

...Among the chemical agents believed to be held in Syria's stockpile are mustard gas, a blistering agent, and the lethal nerve agents VX and sarin, according to various analysts. Engineers working for Assad’s regime have begun combining the two chemical precursors needed to weaponize sarin gas, an American official with knowledge of the situation told Wired.com’s 'Danger Room' on Monday.

Rasmussen echoed the warnings from U.S. President Barack Obama that the Syrian government may indeed be considering using such weaponry to end the conflict.

Gunmen loyal to opposite sides in neighboring Syria’s civil war battled in the streets of northern Lebanon on Wednesday, and the death toll from two days of fighting was at least five killed and 45 wounded, officials said.

The Lebanese army fanned out in the city of Tripoli to calm the fighting, with soldiers patrolling the streets in armored personnel carriers and manning checkpoints. Authorities closed major roads because of sniper fire.

The fighting comes at a time of deep uncertainty in Syria, with rebels closing in on President Bashar Assad’s seat of power in Damascus. U.N. Secretary-General Ban Ki-moon on Wednesday urged Syria’s regime against using its stockpile of chemical weapons, warning of “huge consequences” if President Bashar Assad resorts to such weapons of mass destruction....


Assad’s chemical weapons units head out of Damascus toward Aleppo

As NATO in Brussels gave the go-ahead Tuesday night, Dec. 4, for the deployment of Patriot surface-to-air missiles to protect Turkey against Syrian missiles, DEBKAfile’s military and intelligence sources reported that convoys of the Syrian army’s chemical weapons units headed out of Damascus under cover of dark and turned north up the road to Aleppo. Their destination is not yet known.

Syrian President Bashar Assad had evidently decided to ignore the warnings President Barack Obama issued Monday night that there would be consequences if he or anyone in Syria resorted to chemical warfare and each would be held accountable.

Our sources report that the Syrian ruler is aparently gambling dangerously on the Americans holding back from attacking the convoys as long as they deploy unconventional weapons, and would only react when they are used.

...US forces in the region, Israel, Turkey and Jordan were all braced Monday night, Dec. 3 for action against Syria in case Syrian President Bashar Assad ordered his army’s chemical warfare units to go into action against rebel and civilian targets his own country. None of the Middle East capitals are talking openly about this eventuality to avoiding causing panic.

However, oblique references to the peril and preparations for action came from US officials during Monday. White House spokesman Jay Carney said: “We have an increased concern about the possibility of the regime taking the desperate act of using its chemical weapons.” Such a move “would cross a red line for the United States.”

Without going into specifics, Carney added: “We think it is important to prepare for all scenarios. Contingency planning is the responsible thing to do.”
Posted by Devorah Chayah at 4:31 PM