The Happy Chatan - A Sad Picture 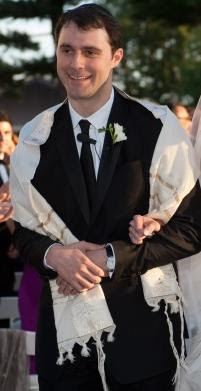 He was married on Shabbat Parshat Eikev in an interfaith ceremony, officiated by Rabbi James Ponet and the Rev. William Shillady, to the daughter of former President Bill and current Secretary of State Hilary Clinton---Chelsea Clinton, a Methodist.

Reports say the program included "friends and family reading the Seven Blessings, which are typically recited at traditional Jewish weddings following the vows and exchange of rings."

In the photos, he's wearing a kippa and a tallit. Someone should have explained to him what the fringes on the corners stand for.

It makes one wonder why he chooses to identify as a Jew at all. And if he does, why does he not care enough to ensure that his children will be Jews?

(Sorry we had to cut the bride out of the picture, her wedding dress was not tzanuah.)
Posted by Devorah Chayah at 12:43 PM