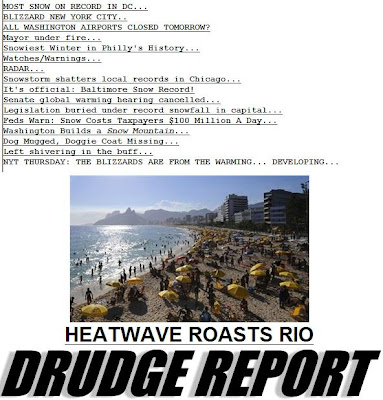 AFGHANISTAN - At least 28 people died and hundreds were trapped through the night in freezing cold and darkness after avalanches closed a mountain highway tunnel in Afghanistan. ...Heavy snowfall and rain also caused floods in the south of the country. Six people have been killed and 10 were missing as a result of floods.

BULGARIA, ROMANIA - Blizzards and snowstorms lashed Romania and Bulgaria, trapping people in their vehicles and cutting power supplies, as a weekend avalanche death toll across Europe rose to 11.

U.S. - Thousands of flights were canceled, schools in New York closed and the U.S. Congress suspended work as a winter storm threatened to drop as much as 20 inches (50.8 centimeters) on parts of the East Coast Tuesday. The storm, the second for the Washington-Baltimore area in less than a week, was accompanied by cold and winds gusting from 35 to 55 mph (56 to 88 kph) in the Northeast. The winds were likely to be intense enough to rival those of a tropical storm. “The words UNPRECEDENTED and paralyzing would describe what is about to happen to the Philadelphia-Baltimore-DC corridor. It’s looking more likely that blizzard or near-blizzard conditions will hit New York City.” Winter storm warnings stretched from Illinois to Massachusetts.

AUSTRALIA - the drought affecting south-west WA since the 1970s is extreme. Now, scientists believe it could be THE WORST DROUGHT IN 750 YEARS,....
Posted by Devash at 9:47 AM