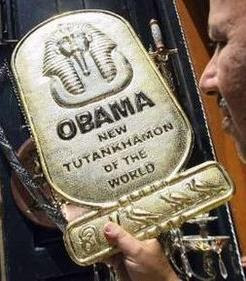 We saw this one coming. See the post "A New King" from back in January. And how ironic is it that B "Hussein" Obama is planning to give his big speech to the Islamic world from Cairo?
(See video.)

Rabbi Sitorsky said in a recent shiur that Obama's insistence on zero growth in the settlements was tantamount to what Paro did when he decreed that all the boy babies of the Hebrews should be killed.

Suddenly, it's ok to talk about the US President's "Islamic roots:"

During a conference call in preparation for President Obama's trip to Cairo, Egypt, where he will address the Muslim world, deputy National Security Adviser for Strategic Communications Denis McDonough said "the President himself experienced Islam on three continents before he was able to -- or before he's been able to visit, really, the heart of the Islamic world -- you know, growing up in Indonesia, having a Muslim father -- obviously Muslim Americans (are) a key part of Illinois and Chicago."

And what about this jewel?

So says President Barack Obama. Or I should say: Barack Hussein Obama.

That's right: Barack Hussein Obama. Say it proud. Say it out loud. The middle moniker that dared not speak its name during the election campaign is now front and centre of the US president's attempt to woo the Muslim world, the theme of his visits to Riyadh on Wednesday and Cairo on Thursday.

As the light of redemption grows ever brighter, the masks are falling and TRUTH is becoming ever more evident. The connection between America and Israel is the last obstacle to the fall of Edom, a necessary part of the complete redemption. So read the good news: