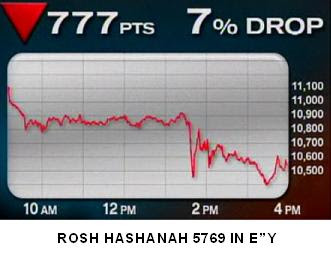 As the seventh month arrived and concluded the seventh year of the shmita cycle in Eretz Yisrael, the American (Edomic) Empire suffered a historic blow to its stock market:

Since there are no coincidences, there is a message here (or maybe even a few) from Shamayim. What are we supposed to take from this?

The first thing that came to my mind is that seven is the number of completion. Seven days make a week; seven years make a shmita cycle. The seventh millenium will be the Great Shabbath of time. On the seventh day Hashem rested from all His creating and commanded us to cease from our labors as well in commemoration of that fact.

If this is a virtual flashing neon sign to the Jews on Rosh Hashana, perhaps it is meant to tell us that Hashem is finished holding back from judging the nations who are seventy and who are obligated to seven mitzvot and who want to divide the land of the seven species---Eretz Yisrael.

Here are some further thoughts on "seven":

(Inner.org) Zayin (7) “A 'vav' whose head extends in both directions and thus appears as a crown. Scepter of a King. [We crown Hashem King in the seventh month---Tishrei.]

(Inner.org) In the Bible we find that G-d has seven eyes (Zachariah 4:10 ). This is obviously not meant to be taken literally, but clearly conveys a secret. In His Providence, G-d overlooks and judges creation from seven perspectives (corresponding to the seven attributes of the heart). [All creation passes before Hashem for judgement in the seventh month---Tishrei.]

Time is also sanctified by sevenths, and we find (Bereshis 2:3): And God blessed the seventh day; the seventh --- shemittah --- year is sanctified; and seven cycles of seven years are crowned by a yovel (jubilee) year. And among months, the seventh --- Tishrei --- is most precious (Yalkut Shimoni, parashat Yisro 276).

...In the Land of Israel, Tishrei is also the harvest season, when the Jewish people witness the material bounty with which God has blessed them. Our sages note that these qualities of Tishrei, "the seventh month," are alluded to by the similarity between the words sheva [seven] and sova [satiety and abundance].

Whatever message you take from this event and the significance of seven, it is definitely a sign for GOOD for תשס"ט whose letters stand for שנה סימון טוב---year of a good sign.
Posted by Devorah Chayah at 3:26 PM