Looking at the Wall 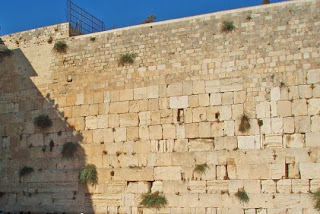 Ancient walls are a common feature of the Land of Israel and this one is perhaps the most famous of all. But, this is not the wall I am concerned with today. It's the wall I see every day as I cross the border checkpoint coming into the eastern half of Jerusalem; the one I can see in the distance even when walking down from the center of town towards Yemin Moshe. It's this wall... 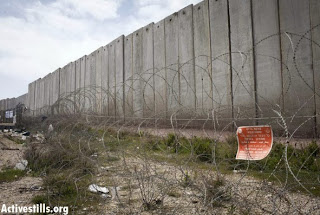 Otherwise known as the "security wall" or" separation barrier"- the one they said would NOT become a "political border." Well, today, it did...

"Israeli negotiators have told their Palestinian counterparts that the ''separation barrier'' that cuts through the occupied West Bank should serve as the border of a future Palestinian state."

Pretty depressing, huh? Well, maybe not so much for those who, unlike me, do not live on the wrong side of it.

But, there is another, happier way of looking at the wall.

In an 18 July 2013 article in Hamodia entitled "The Boy Who Dreamed of Building the Beit Hamikdash," Rav Meir Koznitz gives us his perspective:

Seeing the Geulah in the Security Fence

Reb Meir Lays out the security map of Jerusalem and asks us what we see. We look closely, but don't see anything special.

"Look at the city's borders, at the security fence, and notice the road that has been paved next to it," he says. "Many didn't understand the point of paving a road along the fence. This is not a northern or southern border between two countries that requires constant patrols, so why was the road paved?"

Reb Meir, who has only one thing on his mind - the rebuilding of the Beit Hamikdash - has his own unique explanation:

"The security fence is the wall surrounding Jerusalem, and when Moshiach comes, this wall will have to be halachically dedicated as the wall of the holy city. The Sanhedrin will have to come and check the wall, but while in the past the city was much smaller, the present-day wall stretched for dozens of kilometers.

"There is no way they can do this by foot, and they will therefore have to travel in a vehicle along the whole route of the wall.

"If the road hadn't been paved, it would have been impossible for the Sanhedrin to drive along the entire length of the wall, with its bumps and potholes."

Reb Meir looks up, and with a victorious smile continues: "How can you not see the Geulah on this security map? The motive for the road is so obvious!"

HALEVAI! It should only be so!
Posted by Devorah Chayah at 5:00 PM

Yes, this was great.
I remember that article in Hamodia and it really inflated my expectations.

His story is amazing. Wish it was available online.

One has to ignore all of Livni's pretentions in all this. It has already been released that Netanyahu has no intent on compromising on the Beit El corridor overlooking Tel Aviv and the Jordan Valley either. And none of these things are within the Wall. Negotiations are going nowhere. The imposition phase of the nations against Jerusalem begins this Spring. Obama has to be coy about this until he either has destroyed his own country fully so that he has no internal opposition or until after the Midterm elections in 2014...whichever happens first. He is obviously planning on national self-destruction before Nov. 2014 so that he can begin imposing solutions through the UN Sec. Council this Spring. This seems to be his stated desire.

Ahhh...the sweet taste of an element of the geulah....

Makes a lot of sense.

Many things are being done with one intention, by people which such great gaivah they think they are in charge.

Yet, they are not in the least bit in charge, and this will be the ultimate slash against their pride.

Like it says in Deut. that we will eat the fruit of trees we did not plant, perhaps we will reap benefits from deeds we did not do.

In the meantime, I wrote this 5 1/2 years ago, when the Hizmah checkpoint transformed into what "they" claimed was not a border crossing. (Unfortunately, some of the photos were lost.)