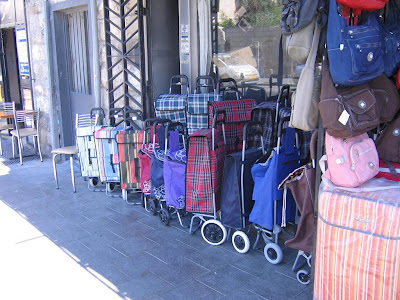 I used the terms "luxury and ease" in relation to Jewish life in chu"l in a comment and someone was quick to respond that they aren't living the high life in chutz la'aretz. I'd like to point out that the terms are relative. When I think "luxury and ease," I think about hot water on demand. I think about having a car. About taking my groceries from the store's cart to my trunk and driving it all home into a driveway right outside my door and carrying them no further then the distance between the car and the kitchen.

Allow me to introduce you to my vehicle in Eretz Yisrael... 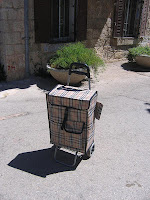 I have not driven a car since April 1996 when I came on aliyah. The reason is partly finances and partly choice. I can't afford to buy or fuel or insure one, but I also enjoy the freedom of not having to house one and feed it and take it for repairs when it breaks down or needs "new shoes." Not to mention that as the population expands, every bit of green space will have to be converted to roads and parking to accommodate this mixed blessing if every person will insist on owning his own vehicle. There have to be limits to private consumption.

Anyway, this is how I get around now. On my own two feet with a shuk buggy (cart or aggala, take your pick) to carry what my hands can't hold. That usually includes all the groceries each week. When my family was larger, I used this kind. 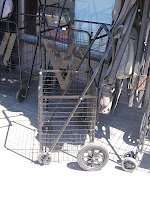 I've even moved house with a buggy like this. Many, many trips with small items, saving the big stuff for the movers. They charge by the hour, so every bit I could take on my own saved me money. The large one (click the picture to see it bettter)  is the "cadillac" of shuk buggies... 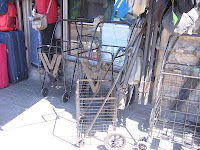 When I had to move across town, I borrowed one like this and took it on the bus. They fold up for easy storage on your mirpeset.

The hardest thing about using shuk buggies for transport is the steps. Many neighborhoods around the country are built terrace-style up the sides of hills, like this one in Har Nof. 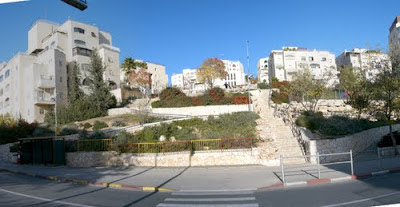 When I first came to Israel, I lived up North in a development town where I had to drag my shuk buggy up 92 steps to reach my house from the major grocery. Well, I could have paid for delivery, but then you never know when it's going to arrive and it's usually Arabs who are bringing it.

For really major shopping like Pesach and Sukkot, I've indulged myself and hired a taxi. Now, that is real "luxury and ease!"

Note:  They're called shuk buggies because they are commonly used while shopping the stalls in the shuk where your hands can quickly fill to capacity and there is not space for anything larger.
Posted by Devorah Chayah at 12:55 PM