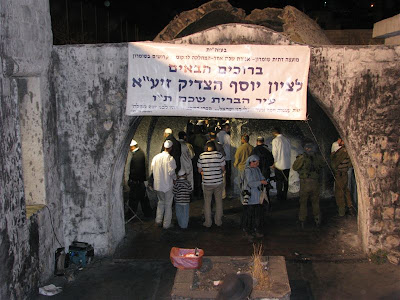 Ben Yosef Livnat, Hy"d, nephew of Minister Limor Livnat and 25 year old father of four from Jerusalem, was murdered by US-trained and US-armed Arabs occupying the kever of Yosef HaTzadik in Shechem where he went to pray on Erev Shvi'i shel Pesach.

Today's Jerusalem Post reports that Ben Yosef Livnat was circumcised at Kever Yosef and he grew up in Elon Moreh overlooking the site. His father had learned in Yeshivat Od Yosef Chai before the holy site was turned over to our enemies by a traitorous government.

In a separate article on the same page of the newspaper, a brother of one of the Breslov Chassidim who were injured blamed the victims for the murder:

"This was a crime by the young people who went in there. Going to the tomb depends on our rabbi who decides. Nothing bad has ever happened when he has given his approval."

This is just the kind of wrong thinking that has gotten us into this situation and keeps us victims instead of owners and rulers in our own land.

But it gets worse:

"Haim Reicher, chairman of the Yesod Haolam organization that organizes visits to Joseph's Tomb, said that part of the problem is the army's failure to answer the needs of the many Jews seeking to pray at the holy site.

" ' There are hundreds of thousands of people who want to pray there and they give you what, 10 buses, once a month, once every two months, you think that's enough?' Reicher asked

" ' We don't want to conquer this place, we don't want to put up the Israeli flag. We just want to come and pray for five minutes. That's what happened last night. They went to pray, and when they left and went to the cars and were leaving, they were shot.

" ' This is what bothers us, that for 17 years we've been battling over this with the army and the police to increase the number of people they allow in. We don't want it to be continuously open, but for the army to speak with us and coordinate with us more. The army isn't to blame, they do blessed work, every single one of them. But this place is abandoned,' Reicher said."

And this just one day before we read in the Torah portion for Shvi'i shel Pesach:

"Moses took Joseph's bones with him, for he [Joseph] had adjured the sons of Israel, saying, God will surely remember you, and you shall bring up my bones from here with you." (Shemot 13:19)

Do you imagine in your wildest dreams that Yosef HaTzadik was anxious to have his bones brought up to Eretz Yisrael so that his kever could be desecrated over and over again and his descendants could beg five minutes to pray there and then get murdered for their trouble?

I understand what Mr. Reicher is trying to say. He is trying to impress upon the reporter that Jews are not a "security" threat. But, again, I have to point out the tragedy of this kind of thinking. In fact, YES! We DO want to reconquer, not just Kever Yosef, but all of Shechem! And YES! We DO want to raise the Israeli flag over it. And YES! We DO want it open continuously for any and ever Jew who wants to pray there anytime he likes with no need of permissions!! and without any further spilling of Jewish blood!!

According to the report, Ben Yosef's father said, "Individual revenge is not relevant in connection with his son's murder... He explained that his son's death was part of a larger history of violence perpetuated by the Palestinians against Israelis, and the revenge for all these deaths should be a collective one."

He's right. No one can think of Kever Yosef without remembering Rabbi Hillel Lieberman, Hy"d.

The Oslo Accords gave Shechem to the murderous enemy while Kever Yosef was to remain a protected enclave within. In October 2000, in typical fashion, Ehud Barak left Druse border policeman Madhat Yusuf to bleed to death and then pulled back the Israeli soldiers so that the Tomb fell into the hands of the very Palestinian police who murdered Ben Yosef Livnat.

HASHEM! Please raise up our righteous Mashiach to avenge the blood of all Your holy martyrs! And please, no more martyrs.
Posted by Devorah Chayah at 4:51 PM