Enemies of the Jews and Jewish Enemies 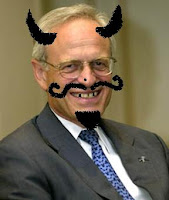 They come in all shapes and sizes and from every nation on the globe and many even come from "Jewish families." But something is terribly wrong with their neshamas!

“Netanyahu must make a choice: take on the president of the United States, or take on his right wing,”....

Would it do any good, do ya think, to remind the Ex-Envoy that the Prime Minister of Israel was elected by the right-wing to be the leader of Israel, not the lacky of the United States President?
Posted by Devorah Chayah at 4:49 PM