Israel's Vulnerability to An Attack By Iran


Idolatry in the camp of Israel (The Book of Our Heritage, Eliyahu Kitov)

You followed me in the wilderness in a land that was not planted (Yirmeyahu 2:2) – The Sages explained: This [the complete dependence on G-d that characterized Israel’s existence in the desert] is only temporary and will last only as long as you are on the way [to the Land of Israel] and until the Torah is permanently implanted within you. Afterwards, you shall enter the land which is My place, and you will plant at the time of planting, sow at the time of sowing, and harvest at the time of harvesting, and I shall grant you bounty greater than any other nation or land.

However, the imperative to remove all traces of idolatry and to serve only G-d—this is incumbent upon you now and for generations to come. Have you removed the foreign gods from your midst? Have you brought yourselves under My wing and shattered all of your idols? Let Amalek come and examine you. If your hearts are completely with Me, you have nothing to fear. But if there is among you a man or woman whose soul still clings to the idols of Egypt and their abominations, let them [the idols] come and save you from the wicked Amalek! The verse therefore states: And Amalek came (Shemos 17;8)…and he tailed after you [striking] all the weak who fell behind (Devarim 25;18).

After he tailed after you—R. Nachman explained: All those whom the “protective cloud” cast out were caught by Amalek. The Sages explained: This refers to the tribe of Dan who were cast out by the “protective cloud” because they were all idol-worshipers. The idol which Michah had created was in their midst, and there were many among them who had not wholeheartedly resolved to serve God alone (Yalkut Shimoni, Parashas Ki Setze).

The complete obliteration of Amalek will occur at the time of the final redemption, immediately preceding the month of Nisan. A trace of that obliteration is felt each year during Purim, which falls in the month preceding Nisan. The reading of Parashas Zachor was therefore prescribed for this time of year.

Now, Amalek comes to threaten us again, davka this week at this time of year...

And sinners among our people have allied themselves with idolatry at the center of power in our country, davka now, this week before Purim, Parashat Zachor, in the shadow of the threat of war with Amalek. 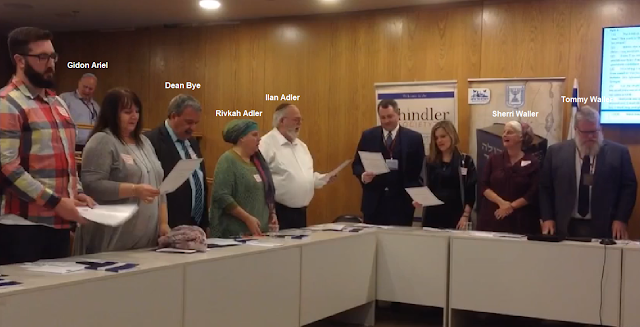 May all the enemies of God and Israel fall, never to rise again.
Posted by Devash at 8:56 PM