There Will Never Be a Palestinian State

They'll never accept an independent state because that is not their goal. They are incapable of building; only of destroying.

Our own Jewish government can give away the land, but the (so-called) Palestinians could never take it away. All they can do is turn it into chaos, destruction and failure just like they did with Gaza.

With the whole world either assisting the Arabs or standing back to watch - not one of them lifting a finger to help - the State of Israel was reborn and has thrived and prospered in spite of constant attacks from every possible direction.

On the other hand, the nations are so hell-bent on creating a (so-called) Palestinian State that they have poured millions (if not billions) of dollars into it; arming and training their "police"; offering them a seat at the "table" even up to writing them onto maps at the same time that they erase us.

You don't see them making any attempt to prepare the infrastructure for an independent state. The only preparations they are making are to launch a war against us. The whole world has been either witness to or collaborator with the ongoing training and arming of their military-terrorist force.

But, despite all of that, Israel will continue to rise to the greatest heights and there will never be a (so-called) Palestinian State. 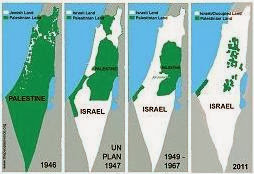 Yes, if there were ever a Palestinian country then they'd have an existing government, import/export, their own culture and language and existing infrastructure including the ability to provide their supposedly existing people with water, electricity &&& - kate

I know this about 10 years and I´m not a Jew but a simple German worker.

Was never even a question. Of course, there will not be a 'Palestinian' state. Can't understand why many Jews are so blinded by what the nations (man) say. All they have to have is faith in the One Above and the Jews returning to Torah and they will find everything in it. Also, Gush Katif, Gaza, anything that is even thought of being given away will soon return to its rightful owners, we, the Bnai Yisrael. This is a worldwide war being waged against the Ribbono Shel Olam, but how does one wage war against the Creator - by waging war against His representatives, the Jews. Anyone not blinded by falsehoods should see the handwriting on the wall already. The time has come for the Geulah Shleimah.

Anonymous, you sound like a chutznik. Do you live in Is-reality?

I said there would never be a Palestinian State, but that does not necessarily preclude the Erev Rav regime from forcing Jews out and letting the Arabs destroy it all for nothing.

After Yamit and Gush Katif, no one can be that sure it won't happen again. People like you were also very sure God would not destroy the Temple, but He did - twice!

20 Menachem Av 5780  Comment received :  "Regarding Rome and the 3 City-States and their influence, etc., has there been any analysis r...