A Lifelong Love for Israel 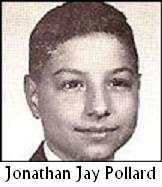 I was already very familiar with the J4JP website and just as I recalled, the information there is concentrated on the legal/political issues of the Pollard case. There was nothing that I could find there about Jonathan Pollard, the private person.

Continuing to excerpt portions of the Wolf Blitzer book Territory of Lies:

…he [Jonathan] very much wanted to live in Israel. But they [The Pollard family] did not share his burning need to settle there. …”For as long as I can remember,” he affirmed, “Israel has figured prominently in my life as an object of religious commitment as well as a source of personal strength.”

His mother recalled how scared he was about the prospect of Israel’s being destroyed. “Right before the Six-Day War,” she said, “…Jay was crying. He said, ‘They are going to kill Israel. I’ll never get to see Israel.’ …The next day, I told him that the Israeli Air Force had knocked out the Arabs and the whole war was over. I can’t tell you his reaction of unbelievable joy. ‘Then I’ll get to see Israel!’”

…Thus, Israel, during the war, began to completely dominate Pollard’s thinking. He read about the country voraciously.

All of his misery tended to reinforce his fascination with Israel: “When you have a small kid growing up in that kind of [anti-Semitic] environment, as I said, it tends to solidify the emotional bonds one has with a distant, faraway, seemingly superhuman country that’s larger than life, which in effect represents the self-respect---the physical security---which you yourself were incapable of generating.”

He admired in Israel many characteristics lacking in himself. “I got beaten up,” he said, “but at least I knew the Israelis would beat up a couple of Arab countries and maybe it would make me feel better.” Israel’s victory in 1967 further served “to emphasize in my mind the advisability of leaving for Israel, where I could put all the humiliations of my adolescence behind me.

“So there was this inner dilemma, I guess, that was building up in me slowly, but relentlessly at the time. But how could a thirteen-year-old boy immigrate to Israel alone?”

His parents recalled an incident just before his Bar Mitzvah that had a significant impact on Jay. The family had belonged to the Reform Temple in South Bend. A new rabbi had been brought to the congregation from Toledo, someone who was part of the so-called Classical Reform movement. “He grew up in the tradition of Sunday morning services for Jews,” Dr. Pollard said.

Jay had been working for several weeks on his Bar Mitzvah speech. It was taken from Isaiah, with the message that Israel will be a leader among nations. But the rabbi, who was not a Zionist, did not want Jay to discuss that issue. “He wanted Jay to rewrite the whole thing,” Dr. Pollard said. “And Jay went to Molly and said, ‘I don’t like that man.’”

The family switched to the Orthodox synagogue in town where Jay received his Bar Mitzvah.

Open message to "Justin," if you're reading this. Am Yisrael has a right to know publicly published details of Jonathan Pollard's life which can only further endear him to their hearts.

And for the record, it's a shanda that you have endorsed Pat Robertson by publicizing him on your J4JP website. He's an idolater, the son of an idolater, and he has spent his life promoting idolatry throughout the world. Any "help" he provided would be done for purely egoistic motives and should neither be requested nor acknowledged.
Posted by Devorah Chayah at 4:34 PM