It Has Already Begun - "The Boogaloo Boys"

In my last blog post, I explained why a right-wing response to Antifa had to arise in light of the ongoing protests in America right now.  Apparently, it already started as reported...

WASHINGTON — A California Air Force sergeant with ties to the extreme-right “boogaloo” movement was charged Tuesday with the murder of an Oakland policeman during Black Lives Matter protests, one of two police officers he is accused of killing in recent weeks.

The Justice Department said Steven Carrillo gunned down Oakland police officer Patrick Underwood in a drive-by shooting from a white van during the May 29 protests over the police killing of a handcuffed African American man in Minneapolis.
Eight days later, on June 6, Carrillo’s van was discovered to the south near Santa Cruz, and when police neared Carillo’s residence, he ambushed them and killed another officer, Damon Gutzwiller.

...Officials said the Air Force security specialist was associated with the underground “boogaloo bois” ideology, which espouses a mix of anti-government extremism and civil and race war. Its followers often openly carry assault weapons and wear military-like and flowery Hawaiian garb in public.

According to local reports, Carillo — who had weapons, ammunition and materials for bombs in his van and home — wrote “boog” on the hood of a car in his own blood when he was arrested.

“The boogaloo term is used by extremists to reference a violent uprising or impending civil war in the United States,” said US Attorney David Anderson on Tuesday during a press conference in Oakland.

It was the second case of far-right extremists being arrested in relation to the protests against police brutality that swept the nation after the May 25 killing of George Floyd by a Minneapolis police officer, since charged with murder.

On June 3, Las Vegas police arrested three men also associated with the boogaloo movement and charged them for attempting to incite riot and start fires during a Black Lives Matter protest.

The three, two formerly in the military and one in the army reserve, had originally sought to stir up violence in mid-May protests against the coronavirus shutdown, the indictment said, citing a confidential FBI source.

On May 30, they decided to try to use the protests over Floyd’s death as a cover to stir up violence, preparing guns, ammunition and Molotov cocktails.

One “was very upset that the protests were not turning violent,” the indictment said.

In case you think this might be an isolated event, think again. 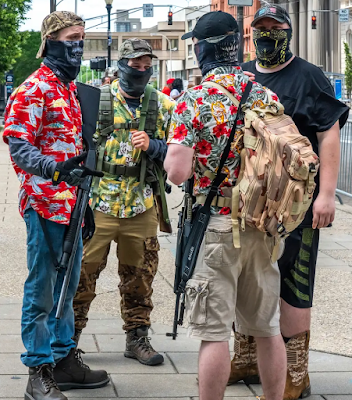 
...The boogaloo movement, adherents to which are often referred to as boogaloo boys or boogaloo bois, is a loosely organized American far-right extremist movement.

Participants generally identify as a libertarian citizen-militia, and say they are preparing for a second American Civil War, which they call the "boogaloo". Widespread use of the term dates from late 2019, and adherents use the term (including variations, so as to avoid social media crackdowns) to refer to violent uprisings against the federal government or left-wing political opponents, often anticipated to follow government confiscation of firearms.

The movement consists of pro-gun, anti-government groups. The specific ideology of each group varies, and views on some topics such as race differ widely. Some are white supremacist or neo-Nazi groups who believe that the impending unrest will be a race war; however other groups condemn racism and white supremacy. The boogaloo movement primarily organizes online (particularly on Facebook), and participants have appeared at in-person events including the 2020 United States anti-lockdown protests and the May 2020 George Floyd protests. They are often identified by their attire of Hawaiian shirts and military fatigues, and are heavily armed. In May and June 2020, Facebook acted to limit the movement's activities and visibility across its social media platforms.

...Extremism researchers first took notice of the word "boogaloo" being used in the context of the boogaloo movement in 2019, when they observed it being used among fringe groups including militias, gun rights movements, and white supremacist groups. This usage of the term is believed to have originated on the fringe imageboard website 4chan, where it was often accompanied by references to "racewar" and "dotr" (day of the rope, a neo-Nazi reference to a fantasy involving murdering what the posters view to be "race traitors"). Researchers from the Network Contagion Research Institute (NCRI) found that the usage of the term "boogaloo" increased by 50% on Facebook and Twitter in the last months of 2019 and into early 2020. They attribute surges in popularity to a viral incident in November 2019, when a military veteran posted content mentioning the boogaloo on Instagram during a standoff with police, and to the December 2019 impeachment of Donald Trump. The boogaloo movement experienced a further surge in popularity following the lockdowns that were implemented to try to slow the spread of the COVID-19 pandemic in the United States, and the Tech Transparency Project observed that the boogaloo groups appeared to be encouraged by President Trump's tweets about "liberating" states under lockdown. The Tech Transparency Project also found that 60% of boogaloo Facebook groups had emerged following the pandemic lockdowns, during which time they amassed tens of thousands of adherents. A Facebook spokesperson said that Facebook and Instagram had changed their policies as of May 1 to "prohibit the use of ['Boogaloo' and related] terms when accompanied by statements and images depicting armed violence." (Source)

Don't say no one warned you.

The Boogaloo Bois are an early sign of the consolidation of the Right and Far Right. Ie. the alt Lite and Alt right.

This is very similar to what happened in pre WW2 Germany with the German Freicorps. Quite a few were WW1 veterans. They were a large series of paramilitary groups (sound familiar?). In the early stages they fought battles with the Marxist Left. One unit even killed Rosa Luxemburg.

When the Nazis took power, these groups were absorbed into the Nazi state.

The only difference between groups like the Proud boys, the Christian Right, Trump'Pedes, 2A groups and the various militia groups and survivalist groups with Neo Nazis and the KKK people is an economic crash.

Yidden! start making a plan to move to Israel. This won't end well!

Just for peace of mind, why not get your documents in order now. Like a Passport for every family member, all your Birth Certificates, Marriage License, Driver's License or State Identity Card, Any Professional License, School and Medical Records ect. Just get official copies of your Birth Certificates, Marriage License and take them to your local Secretary of State office for Apostille, for example: Request an Apostille | California Secretary of State https://www.sos.ca.gov/notary/request-apostille/. Then contact your local rabbi and get a letter from him stating that you are Jews from a Jewish mother. Remember Kristallnacht and 30 November!

This is not to diminish what is happening, because what is happening is real. But it's all staged and manufactured, right down to the hard-right, white-supremacist tinged, absurdly-named "movement" that no one heard of until two weeks ago, and only started being noticed last summer, so we are told...just in time for whatever production they put into play with (first) COVID and (then) the "sudden" emergence of "grass-roots" rioting in the color revolution being organized and whipped up in America (that's what's going on for real).

For an Israeli comparison that may be more understandable as to what the Boogaloos are, Avishai Raviv, known agent of the state, also manufactured, had more legitimacy in that he tuned in to a real zeitgeist. He was more real than they are. And he's 100% fake.

The genuine zeitgeist in flyover country in America is to hunker down and keep trouble out. Not go to the kill zones in the urban areas seeking retribution and thrills.

That being said, a massive conflict is coming, has already started, in fact, and Jews would be wise to get out, because even when they are not the targets, they will be caught in the crossfire.

Yakov, you are right, but not just for peace of mind, this is urgent. After Pittsburghnacht I wrote that Jews have to do exactly that, get everything in order, passports, papers, finances, start, just start packing up, find online transferable parnasa, etc, etc. Then one would have had a leisurely year and a bit for the process. I also wrote that there may not be flights in the future and that people should consider what their situation will be when there is no police to rely on and there is a mob on the loose. Now it is urgent. Israeli rabbis are screaming for Jews to make aliya, see Rav Anava's latest shiur, in which he blames diaspora rabbis actively dissuading people who would have moved from doing so, predicting disastrous scenarios of children off the derech, no food to eat etc, etc. Is aliya easy? For most people not, there are challenges, but that applies to doing anything worthwhile in life. People with families have to have some kind of a plan, but also lots of flexibility and emuna. It seems that emuna is supposed to apply to every area of life except for aliya. There was a class emuna and corona, everything the rav said could have applied to emuna and aliya, but even that mere suggestion is not allowed. Hashem yishmor.

Agree with Shimshon! This chaos has been preplanned. When Trump got in instead of their nominee whom they thought was a shoo-in; they had to do anything and everything to get him out because their original plan was in the making for decades and nothing was going to stop them. Many good people are aware of this but the uninformed and masses are the danger. Guess this is the way H' is getting the Geulah to materialize. The righteous will eventually benefit while the evil ones will destroy themselves. In the meantime, danger is brewing and Jews must awaken and see to come habayitah.