The Price of Peace

I saw a headline that said the US "expects" Israel to extend sovereignty in the West Bank in the coming weeks. 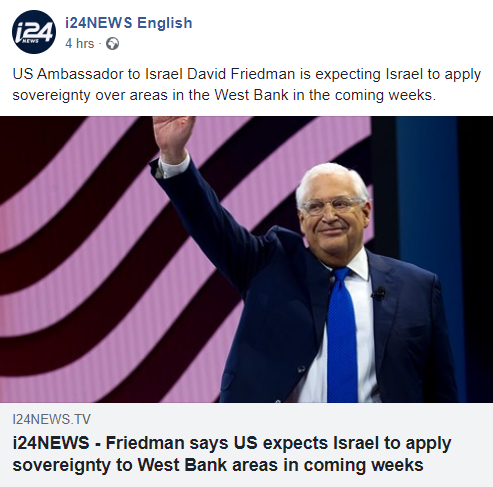 That could be taken one of two ways - as a simple observation or a statement of intent.  I think it is their way of publicly putting this non-government on notice of what is expected of it to do for the sake of Trump's re-election campaign.  This has got to be a done deal SOON.

Prime Minister Benjamin Netanyahu must offer Palestinian Authority President Mahmoud Abbas to negotiate, based on the establishment of a Palestinian State in 70% of the West Bank, for the US to support Israel moving forward with annexing the other 30%, US Ambassador to Israel David Friedman told The Jerusalem Post.

Obviously, they are trying to portray it as a supportive act on their part, but it is much, much more than that. Everything the Americans do is as if it's a favor, but it's really only for their own self-interest, and that's fine, just be honest about it.  Better yet, they should do us both a favor and just butt out.  Because every time this starts up again, HKB"H throws something else their way as a deterrent.

Israel must sign over 70% of Judea and Samaria to Abbas and help create the Terror State of Palestine so that she may be recognized as the legal owner of the remaining 30%.  This is the price of peace, not with the Palestinians, but with the United States of America.  And even then, it won't buy peace with all Americans and certainly not with the Arabs!

I have a message for you Mr. Friedman, Mr. Pompeo:  Not one inch of Eretz Yisrael will ever be turned over to foreigners again without the kind of fight the likes of you have never seen. 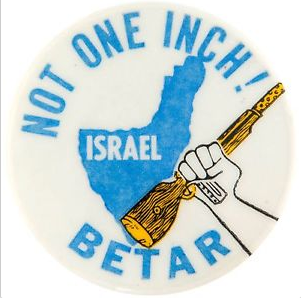 Amen to that last paragraph!

Amen to that last paragraph!

Abbas may soon have an "accident" if he doesn't get on board this latest greatest American middle east fiasco. Nothing new there. Ol' madman Kim just had an "accident" because he isn't complying with the American imperium.

And what a track record it is: Afganistan, Syria, Libya, Iraq, Iran, Lebanon, Yemen the PA.

Every single area that America touches in this region, death and destruction trails right behind. Kind of interesting isn't it?

Right. Anyone who attempts to divide the Land of Israel fights THE GOD OF ISRAEL HIMSELF. Just ask Sancherib King of Assyria how THAT works out. II Kings 19:32-37 (32) Therefore thus saith the LORD concerning the king of Assyria: He shall not come unto this city, nor shoot an arrow there, neither shall he come before it with shield, nor cast a mound against it. (33) By the way that he came, by the same shall he return, and he shall not come unto this city, saith the LORD. (34) For I will defend this city to save it, for Mine own sake, and for My servant David's sake.' (35) And it came to pass that night, that the angel of the LORD went forth, and smote in the camp of the Assyrians a hundred fourscore and five thousand; and when men arose early in the morning, behold, they were all dead corpses. (36) So Sennacherib king of Assyria departed, and went and returned, and dwelt at Nineveh. 37 And it came to pass, as he was worshipping in the house of Nisroch his god, that Adrammelech and Sarezer his sons smote him with the sword; and they escaped into the land of Ararat. And Esarhaddon his son reigned in his stead". https://mechon-mamre.org/p/pt/pt09b19.htm

Friedman to 'Post': We need to strengthen Israel-US ties with peace plan