Latest Craziness From the Fake Sanhedrin

It's that time of year when the Fake Sanhedrin issues its commemorative machzit hasheqel coin.  This year, it pays homage to Eisav and the "twin" relationship with Ya'aqov. 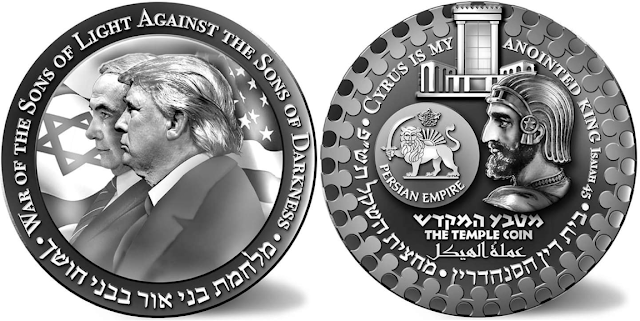 It is forbidden to sing their (practitioners of foreign worship) praises, and even say how pleasant looking the non-Jew is; even more so to sing the praises of their deeds, or like one of their things: as it is said "Do not have mercy" (Deut. 7:2)—do not let them find favor in your eyes, because it causes one to cling to them and to learn from their bad deeds. (Mishneh Torah, Laws of Foreign Worship and non-Jews 10:6)

There are those who may say that we do not have full control over Israel (יד ישראל תקיפה) thus it's ok to praise them. Only very few so called Zionists are willing to make such a statement. They simply cannot answer this halakhic statement.

The erev rav so-called rabbis and their am haaretz followers think they are actually pulling off this scam. There will not be a Sanhedrin until we have the Geulah, Moshiach and the Beit HaMikdash. These 'fakers' want to sacrifice animals and all the other duties that pertain only to when we will at long last have our Beit Hamikdash, not before. It was almost hard to believe what I'm reading. This is the ultimate fake news today and to produce these coins is just too much. We are now living in the sickest time ever. Don't even think that the era before the Mabul was as bad as now.

Sorry, Moshe. But, although this body calling itself a Sanhedrin is a fail. It is important to point out that the agreed upon hacham to grant semicha to the first three individuals was not some way out there, non-mainstream, rabbi with wild ideas, but was none other than Rav Moshe Halbershtom ztz"l of the Eidah Haredith.

There is a very clear opinion of the Rambam that one may establish the Sanhedrin and build the Temple before Mashiah comes. The Rambam simply states that one we believe to be mashiah actually builds this then he has a hazaqa of being Mashiah.

And of course, I do not have to mention the permissibility of bringing the Qorban Pesah is a collective state of tuma.

Now, do I think we can get it together and do all of these things? May HaShem forgive my pessimism, but no, not the way we're going. (frown)

The web site is just selling junk. It has nothing to do with the Sanhedrin.