The Bullies On The Block

This is a famous quote from the Prophet Yechezkel's description of the future War of Gog uMagog which is read on Shabbat of the Sukkot Festival. One year ago at Sukkot, the Russian army invaded Syria. This year at Sukkot, Russia sent 7-10 warships in a provocative trek through the English Channel en route to the Mediterranean waters off Syria's coast. They are expected to arrive within a week.

Although the set-up for what we are seeing today started at least as early as 2008-2009, I think these "birthpangs of Mashiach" are occurring at this particular time of year in order to clue us in to the fact that it will ultimately lead to the War of Gog uMagog at some point.

The so-called Syrian Civil War, which is no "civil war" at all, began in 2011, but the seeds of it were planted even earlier.

DIRECTORATE GENERAL FOR INTERNAL POLICIES
POLICY DEPARTMENT A: ECONOMIC AND SCIENTIFIC POLICIES
INDUSTRY, RESEARCH AND ENERGY
An Assessment of the Gas and Oil Pipelines in Europe

"Security of supply is one of the priority objectives of the EU's new energy policy. The Commission is concerned that Europe's energy networks are no longer up to the task of providing secure energy supply in the foreseeable future. The physical ruptures of energy transport networks following the crises with transit countries (Ukraine in 2006 and 2008 and Belarus in 2007) have forced the EU to adopt the strategy of diversifying supply routes which would gradually reduce its dependence on transit countries."

Under Section 2.2.1 Pipelines from Third Countries (Import Pipelines) we find the following:

This import route is under development and is seen as a major priority area for the EU-27 security of supply, as this route has considerably future supply potential."

"Despite of progress in the EU infrastructure priority projects, there are still major future challenges facing the EU gas market, amongst others:

i) to reduce the vulnerability to gas supply shocks;

ii) to plan for increasing import dependency and the uncertainty about the availability of gas reserves;

iii) to facilitate the development of an integrated gas market, due to the EU enlargement;

iv) to handle the climate challenge where natural gas will be both a bridging and a future energy source;

v) to prepare the coming investments for climate change impacts on the pipeline routing and other infrastructure in order to integrate increasing climate risks into investment planning.

As part of the Commission's five-point Energy Security and Solidarity action plan, the above mentioned four areas for gas will be strengthened. The development of a Baltic interconnection plan will improve the integration of the missing continental members.

"EU natural gas supply is concentrated in a handful of countries (primarily Russia, North Africa and Middle East), some of which are exposed to high geopolitical risks. Supply and pipeline transmission from these countries can be threatened by wars, internal conflicts, export or import embargos and terrorism. Gas transportation through these countries often involve transport along long and vulnerable pipeline routes."

From Section 6.2 Russia as a Supplier, Experiences and Risks on Supply and Transit Routes

"The European Union as the major consumer and Russia as the major supplier are extremely interdependent in terms of their energy policies. ...The transportation infrastructure, including oil and gas pipelines, plays a vital role in this relationship of interdependence.

The existing and projected routes are, however, subject to a great deal of political and economic power play, which potentially undermines or endangers their efficiency.

Along with the Russian-Ukrainian dispute during the winter months of 2006 and 2008, the EU is becoming increasingly worried about the stability of oil and gas exports from Russia. There has been a growing concern that Russia is becoming an unreliable supplier or is using its dominant position to promote its political aims. As a reaction, the EU has begun to eagerly promote the need for energy diversification aiming to improve the overall energy security level within the EU borders."

"The European Union's effort to curb Russia's supply monopoly has been ongoing for many years and seemed to gain ground in July 2009 by the signing of an agreement on the Nabucco pipeline, which will connect Europe to the gas-rich Central Asia via the Balkans, Turkey and Caucasus with back-up from the main transit countries: Austria, Hungary, Romania, Bulgaria and Turkey.

The Nabucco has a capacity of 30 mcm of gas per year, i.e. one fifth of the current Russian export to Europe and could be finished in 2015. The source of natural gas for the Nabucco, however, remains unclear. Azerbaijan is a small supplier, Iran has large gas resources, but there are serious political obstacles to making trading agreements with Iran.In Iraq's northern part (Kurdistan) efforts are made to extract natural gas amounts that could feed half of the Nabucco's needs.

In Turkmenistan where gas is abundant, most of it is exported to Russia and its leadership avoids political steps that potentially undermine its good relation with Russia. However, the country maintains its interest in supplying natural gas to the Nabucco pipeline.

Egypt is also a possible supplier to the Nabucco pipeline, if a pipeline from Egypt over Jordan and Syria to Turkey is completed.

It has also been discussed to purchase Russian gas, but that would undermine the whole idea of diversifying the supply sources to the EU.

These countries are currently not committed enough to supplying gas for the pipeline and the EU and Russia are competing for the resources. Russia recently obtained commitments for additional supplies from Azerbaijan.

Furthermore, the Turkish Government has signed an agreement with Russia about building the 'South Stream' pipeline under the Black Sea to Bulgaria. The South Stream could possibly be finished by 2013. At this point in time, it is considered unlikely that both pipelines will be built simultaneously. It will be difficult to find investors for both of them and it will be difficult to find enough gas to supply both projects."

From the following diagrams, it is clear to see that Syria features geo-strategically in the EU quest for an alternative to Russian supplies of gas. 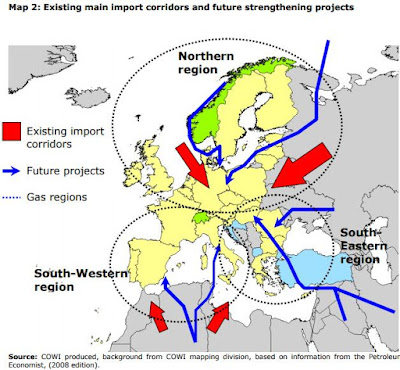 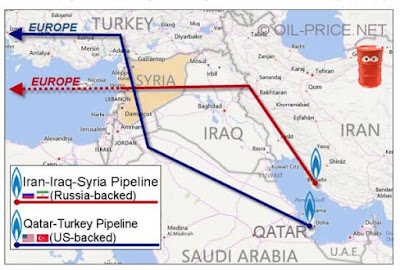 Notice how the "US-backed" and the "Russian-backed"
proposed pipeline routes intersect in Syria!

Is the fight over a gas pipeline fuelling the world’s bloodiest conflict? (2015)

"Major Rob Taylor, an instructor at the US Army’s Command and General Staff College wrote in the Armed Forces Journal last year [2014] that the rival pipelines could be influencing the conflict in Syria.

“Viewed through a geopolitical and economic lens, the conflict in Syria is not a civil war, but the result of larger international players positioning themselves on the geopolitical chessboard in preparation for the opening of the pipeline,” he noted.

Just as the 2003 Iraq War has been linked to oil in the Persian Gulf, Syria may turn out to be all about gas."

Now, to complicate things further, Israel is proposing a solution that bypasses Syria entirely and, as another threat to Russian gas hegemony, puts it square in Russia's crosshairs. 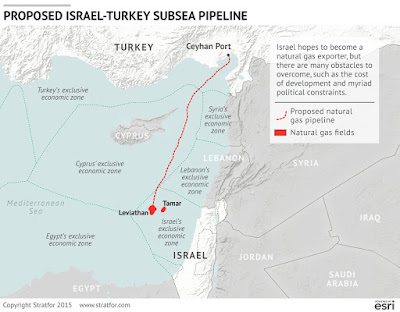 "The Norwegian military has released pictures taken by surveillance aircraft of a fleet of Russian warships sailing in international waters off the coast of Norway and reported to be heading to Syria.

Photos of the vessels, which include the aircraft carrier Admiral Kuznetsov and the Pyotr Velikiy battle cruiser, were taken near Andoya island, in northern Norway on Monday." 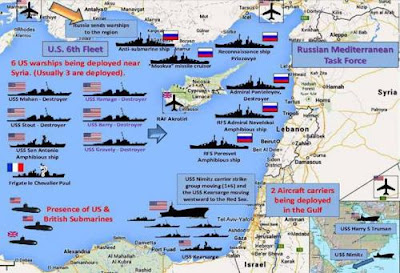 This is what it looked like three years ago. By comparison, the fleet which is currently en route, and which is joining 10 others already on station, is reported to total from 7-10 more.

"They are deploying all of the Northern fleet and much of the Baltic fleet in the largest surface deployment since the end of the Cold War," the diplomat said on condition of anonymity.

"This is not a friendly port call. In two weeks, we will see a crescendo of air attacks on Aleppo as part of Russia's strategy to declare victory there," the diplomat said.
(Source)

We might just as well call this the Battle of the Bullies (the US and Russia). There is not room enough for two Big Bullies in the same neighborhood. There is bound to be a showdown and it looks very much like that is what we are coming to. The one left standing will no doubt be identified as the "Gog" who will confront Mashiach at the End of Days.
Posted by Devorah Chayah at 12:07 PM