Is Russia Preparing Something for Turkey?


Rav Shternbuch received a closely guarded secret that came to him from Rabbi Yitzchak Chever zatza"l, who received it from Rabbi Chaim of Volozhyn zatza"l, who received it from the Gaon of Vilna himself, who revealed it shortly before his death: “When you hear that the Russians have captured the city of Crimea, you should know that the times of the Messiah have started, that his steps are being heard. And when you hear that the Russians have reached the city of Constantinople (today’s Istanbul), you should put on your Shabbat clothes and don’t take them off, because it means that the Messiah is about to come any minute.” (Source)

There certainly are some signs pointing that way... 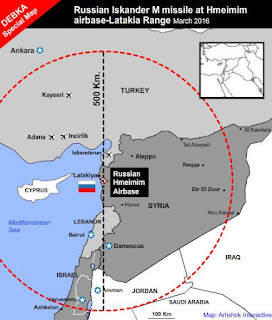 Analysis of the movements of warships and cargo ships from Russia to Syria reveals that Moscow is increasing the pace of its support for the Syrian regime, despite President Vladimir Putin's March 14 announcement that the Russian military would reduce its presence in the Middle East. Internet site marinetraffic.com said that the Yauza, a Russian military transport and icebreaking ship that left Syria in the first week of March, left its home port of Novorossiysk in the Black Sea and is headed back to the Russian naval base in the Syrian port of Tartus. The ship is sailing at a very low speed, indicating that it is carrying heavy equipment, with a Turkish research body reporting that the Yauza is not even leaving a trail in the ocean. Up to 12 Russian military ships are currently sailing in the Mediterranean including oil tankers, patrol ships and the Zeleniy Dol destroyer armed with Kalibr cruise missiles.

Russia has deployed its most advanced tactical missile system, the Iskander-M, in Syria in the last few days, DEBKAfile reports exclusively from its military and intelligence sources. The Russian Iskander is capable of carrying a nuclear warhead and has never been made available to any foreign army for operational use.

...Its deployment in Syria, amid a bloody five-year civil war, is a game changer in terms of the balance of strength in the Middle East. Its range - from the Russian Hmeimim base in western Syria - covers all of Israel up to the southern town of Beersheba, points in Turkey up to the outskirts of Ankara and the eastern and central Mediterranean including Cyprus.

The Russian decision to scale down its forces in Syria was only part of the picture: Warplanes and bombers are being pulled out, but as fast as they leave, they are being replaced by the most advanced missile systems in the Russian arsenal.

US orders families out of south and west Turkey over security
The US says it has ordered families of defence personnel and diplomats out of parts of Turkey amid security fears.

Of course, there are alternative explanations for everything - terrorist attacks, etc. - but because of what's written at the top of the page, I think this is something that's coming sooner or later. It should be sooner.

Israel has also issued an immediate warning (supposedly based on an ISIL attack in Turkey) to vacate Turkey ASAP. However, seeing that Netanyahu is in close communication with Putin, this warning might be for other reasons, i.e. your post. The issue of the Russian ships going so so slow, might be to really position them if needed for attack. I find the above map not so clear about Turkey's borders and cities. Istanbul is on the Bosphorus in the western part of Turkey. The map above is of the eastern portion of Turkey and not so clear. This eastern part is where the Armenians and Kurds are also located. This map for a better idea of what they mean, seems more proportionate to me: http://www.tariharastirmalari.com/map_of_turkey.html. In any event, Putin is one smart guy and could be expected to do the unexpected!

I think the concern is the other way around. The real question is: Is Turkey preparing something for Syria?

The Australian government issued an urgent warning to its citizens on Thursday, urging them to defer travel to major Turkish cities, especially Istanbul and Ankara, and "reconsider your need for travel", indicating the country's second-highest danger level. Australian Foreign Minister Julie Bishop, who announced the warning, said "Terrorist groups continue to threaten further attacks, including targeting tourists and westerners."

(JPost) The US State Department on Wednesday updated is travel warning on Syria, advising all of its citizens against travel to the country and urging American citizens already there to "depart immediately."