Are you ready to leave Mitzrayim? 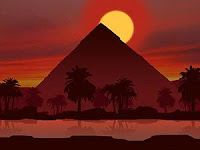 I found a nice blogpost at Chardal with some very interesting quotes from Rav Kook:

Rav Kook on Pesach and Redemption

"The exodus from Egypt only appears to be a past event. But in truth, the exodus never ceases. The arm of God that was revealed in Egypt to redeem the Jews is constantly outstretched, constantly active. The revelation of the hand of God is the breaking through of the light of God, shining great lights for all generations."

We've been given clues to understand where Mitzrayim is today. It is "The West" - everywhere that "Western" culture dominates - and Obama - the leader, not just of the US, but of the entire Western world - is the reincarnation of Paro.

This Pesach, you must not simply follow the injunction to imagine as if it were you going out of Egypt 3324 years ago, but to know that it was you who began leaving Mitzrayim 3324 years ago and we're still on that journey. Are you ready to complete it this year? Are you ready to transition from partial redemption to full redemption? Are those of you who are physically still in Mitzrayim ready - finally - to leave and join Hashem under the Clouds of Glory in Holy Yerushalayim?
Posted by Devash at 1:11 PM